Being a marginally skeptical unicorn, its hard for me to accept anything as truth without thoroughly examining it.  I've been told that this makes me a pain in the ass, as no one likes to getting their balloon popped by difficult questions. 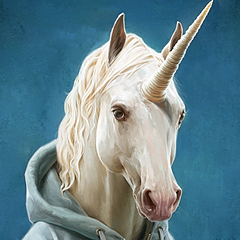 That’s the thing about skeptical unicorns.

You see one in the wild and you never suspect that it’s gleaming, diamond-crusted horn will leave you somewhat deflated. Definitely not my intention here. I’m not hear to destroy the magic. I just want to back it up.

I learned about the chakra system for the first time while training to be a yoga teacher. At first glance, I loved it.  I'm a color whore, and the whole rainbow thing sold me. Also, I loved how each chakra represented a different vibration of energy, light, sound, and emotion, and how the whole system seemed to encompass every aspect of human physiology and psychology. But, there were still problems with it that my Western mind had difficultly grasping.

For example, the exercises.

I didn't get how huffing sandalwood oil and wearing a red scarf every day was going to help me heal from childhood trauma. Or, how eating oranges could make me more orgasmic. I didn't quite disbelieve it, but I didn't understand how it worked either. Eventually, I might have dismissed it all as a fairy tale, except for one thing--when I completed certain chakra clearing exercises, they actually did seem to do what they promised.

So, what gives? Was it the placebo effect, or the power of belief, or was my skepticism unwarranted? After researching the living crap out the chakra system, I’ve come to a conclusion I'm satisfied with.

There are actually three different ways to understand the chakra system: literally, metaphorically, or both.

Traditionally, chakras are recognized as energy centers located in the body that assist in maintaining the physiological, neurological, and emotional functions. “Chakra” is a Sanskrit word which translates to “wheel”, since a healthy chakra is considered to be a spinning vortex of energy. This is a difficult idea for people in the West to grasp, since many of us are taught to think of energy as something that we derive from food, sleep, retail therapy, or copious amount of coffee (this is my preferred method).

We westerners like quantifiable data, with inputs and outputs, and results we can measure. But, for a moment, consider the energy you get from really connecting with another person, or standing on the summit of a mountain as the sun is rising and taking in deep breaths of air, or getting a really great idea, or hearing a song that makes the hairs on the back of your neck stand at attention. How do you quantify that energy?

The chakra system sees the cultivation and consumption of energy in a more holistic way, encompassing not only what we physically put into our body, but also what we absorb through our environment emotionally and mentally, including how we direct our attention, and how we perceive reality.

So, each of the seven chakras, reaching from the base of the spine to the top of the head, represent not only bodily functions, but colors, sounds, emotions, and higher forms of consciousness. A totally healthy person has seven unobstructed spinning chakras, conducting energy or life force up from the earth, through their entire body, and out through the crown of the head. Fascinating.

Even during meditation, when I imagined that I could feel my chakras spinning, and visualize the vibrating orbs of glowing energy, I was still left with more questions than answers. What exactly was happening? I’ve done enough psychological experiments with myself to know that the power of belief and imagination is enough to materialize all sorts results, and I wanted to know if the chakra system was more than just a placebo.

After reading “Women Who Run With The Wolves” by Clarissa Pinkola Estes, I started to look into Carl Jung’s writings on yoga, the chakra system and Eastern spirituality, and that’s when I really started to understand the chakra system in a way that really satisfied me. 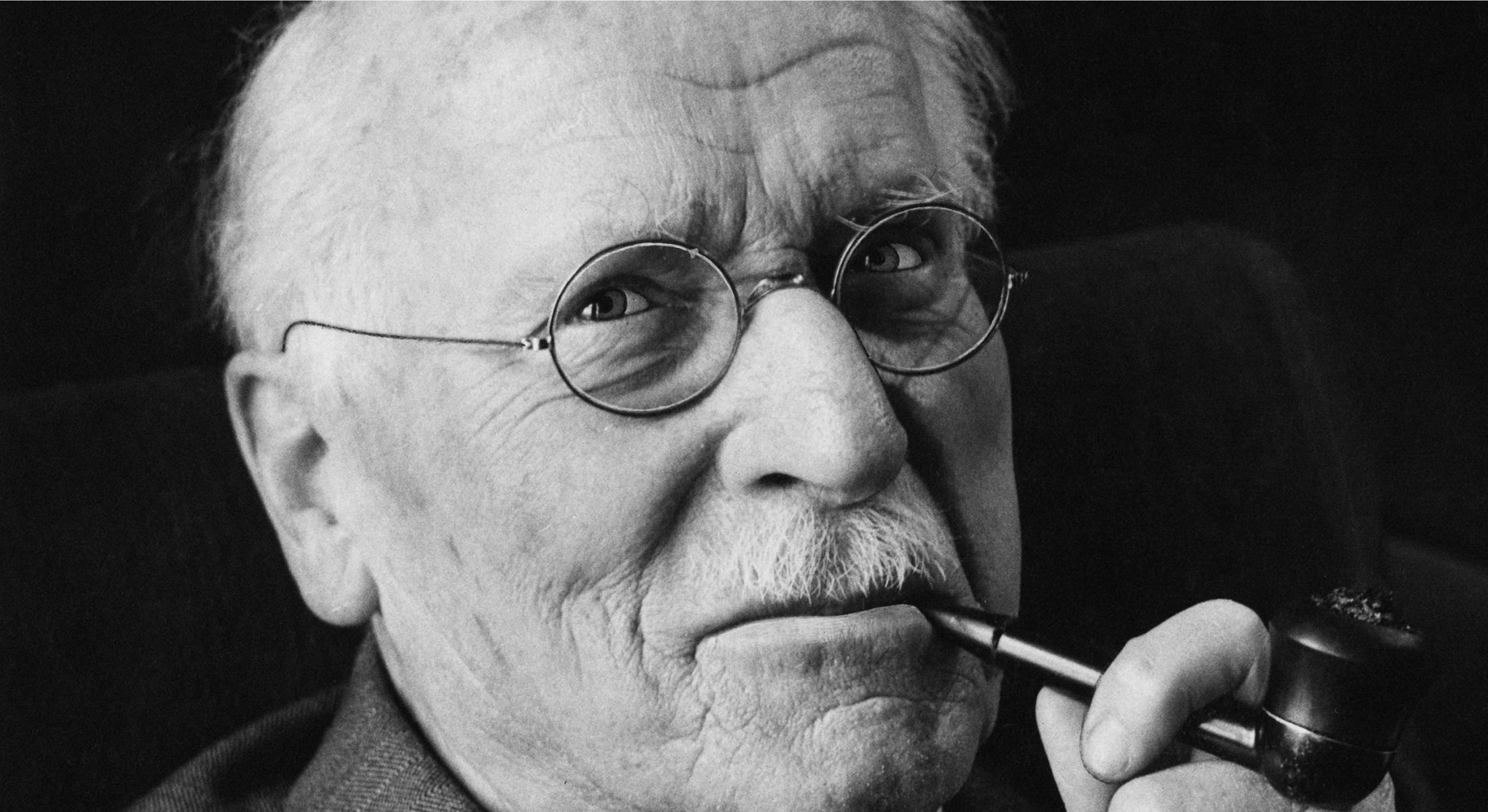 According to the psychologist Carl Jung, the chakra system can be seen as a metaphor for the steps that we go through when achieving self-actualization. Jung valued yoga philosophy's experiential mode of learning about the self vs. the scientific process of using empirical evidence (i.e. science, psychology) in the West. Unlike many of his colleagues at the time, Carl Jung viewed the unconscious mind as empirically real and therefore a crucial aspect of psychology. He believed that to truly understand one’s psyche, a person had to understand themselves outside the opinions and social constructs of society. The psyche was understood as the most complicated aspect of every human being, comprised of thought, feeling, memory, perception, and imagination. Jung believed that the chakra system could be utilized as a set of powerful symbols to help us neurotic, emotional humans understand the complex and rather baffling landscape of the human psyche.

Jung brought this to light in the early part of the twentieth century, when the Western world was just starting to become aware of yoga as a spiritual practice. He foresaw what has happened today, which is the somewhat hasty appropriation of Eastern symbols of spirituality by westerners looking to achieve enlightenment, who unfortunately did not have the cultural context fully understanding them. And so, he tried to bridge the gap, acting as the chakra whisperer, drawing elegant lines between the mystical world of the East and practical empire of the West.  Despite how we may be able to attain a superficial understanding of Eastern spirituality, and can even progress to having very real spiritual experiences, I truly believe that the Western mind still needs consciously bridge the gap between cultures and ideologies with something more than cognitive dissonance.

Also, recall Maslow’s Hierarchy of Needs, a psychological theory developed by Abraham Maslow in 1943, describing the process of self-actualization of a human being. It is uncannily similar to the chakra system. Both systems emphasize the order in which humans become the best possible version of themselves, starting with survival needs like food and shelter, and progressing to sex, love, belonging, self-esteem, self-actualization, and finally, self-transcendence. 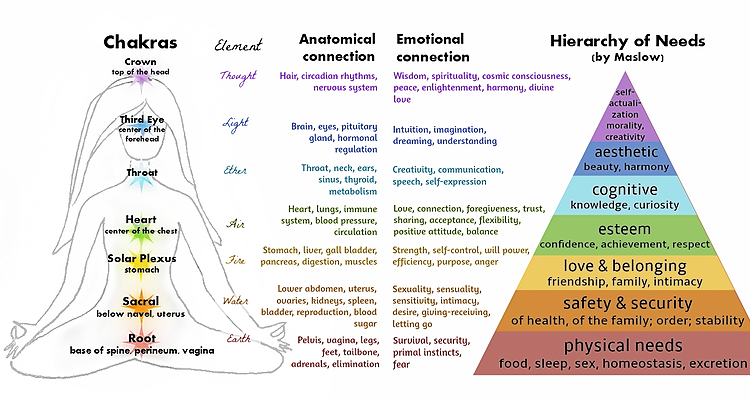 In the Wild Woman Diary, I use the chakra system as my own guide for exploring the psyche and healing the soul. However, I treat each chakra as both literal and metaphorical elements. While my Eastern body experiences these spinning wheels of energy, my Western mind still wants to know what the hell is happening, and why.

And I’m guessing that yours will, too.

The Wild Woman Diary is a multimedia artistic project on several platforms.

Get Wild Woman Diary weekly updates  and a coupon for $10 OFF your first order!

ALL BLACK OBSIDIAN YONI EGGS 30% OFF THIS AUGUST!